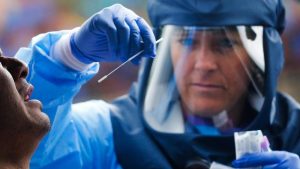 COVI-PASS will determine whether you can go to a restaurant, if you need a medical test, or are due for a talking-to by authorities in a post-COVID world. Consent is voluntary, but enforcement will be compulsory.

More practically, VST now has a direct partnership with the UK government and has secured contracts to deploy its technology in 15 countries, including Italy, Portugal, France, India, the US, Canada, Sweden, Spain, South Africa, Mexico, United Arab Emirates and the Netherlands.

The Innovation for Uptake, Scale and Equity in Immunisation (INFUSE) project was launched in Davos, Switzerland in 2016. The program was developed by an organization funded by the Bill & Melinda Gates Foundation called GAVI (The Vaccine Alliance), which has been calling for a digital health ID for children along with partners in the broader !D2020 initiative like the Rockefeller Foundation and Microsoft.