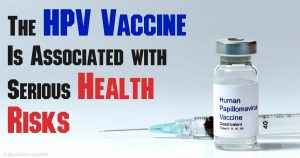 The panel consensus is that virtually all youngsters receive the HPV vaccine. The CDC and American Cancer Society say that there will be 12,000 cervical cancers diagnosed in the United States each year, among a population of 170 million women. The chances of my daughter being diagnosed in any given year are 12,000 out of 170 million, which works out to .007 percent. The odds of her not being diagnosed in any given year, by the same math, is 99.9929 percent.

Accordingly, the blanket claim that the vaccine has no serious adverse effects should be carefully revisited.ed 10 years later, were actually more likely to be infected with high risk, low risk, and all strains of HPV. The four vaccine strains were reduced- but other, possibly more pathogenic, HPV viruses moved in to fill the void.

The American Center for Cancer Research reported in 2015 that girls who received the four strain HPV shot, when assessA VAERS review of HPV vaccine reports shows

and 362 deaths have been reported.

VLA Comment: It is well known that the VAERS reporting is at a 1% level.  Dr. Paul G. King discovered in his research on the flu vaccine concerning a CDC spontaneous abortion study that reported that there were approx. 900 fetal demise reported by Kaiser Permanente covering only the Northern California area.  Dr. King compared that to the VAERS reporting which is required by law that the physicians report the associated vaccine adverse reaction.  He found no reports to VAERS for the same time period.  Can one conclude that if there were 900 reports (in No. California alone) that was not reported to VAERS that the 54,105 adverse reaction reports to VAERS are greatly underestimated?