In a nutshell, scientists all over the world have learned the following about aluminum adjuvant, most of it since 2010 (not a single one of these new discoveries or published studies was considered in Dr. Mitkus’ paper).

From Canada, 2012: “Aluminum (Al) is highly neurotoxic and has been shown to impair both prenatal and postnatal brain development in humans and experimental animals.”
From France, 2013: “However, continuously escalating doses of this poorly biodegradable adjuvant in the population may become insidiously unsafe, especially in the case of overimmunization or immature/altered blood brain barrier…”
From France, 2015: “Thus alum and other poorly biodegradable materials taken up at the periphery by phagocytes circulate in the lymphatic and blood circulation and can enter the brain using a Trojan horse mechanism similar to that used by infectious particles. Previous experiments have shown that alum administration can cause CNS dysfunction and damage, casting doubts on the exact level of alum safety.”
From France, 2016: “We conclude that Alhydrogel [aluminum adjuvant] injected at low dose in mouse muscle may selectively induce long-term Al cerebral accumulation and neurotoxic effects.”
From England, 2017: “The amount of aluminum in the brain tissue was, I would say, extraordinarily high. Very high. My group has measured the aluminum content of probably more than one hundred human brains, and these brain tissues taken from the individuals with a diagnosis of autism were some of the highest we’ve measured bar none. The only ones we’ve seen that are similar were a recent study of familial Alzheimer’s. This in itself is a very important finding.”

So, versus ten years ago, scientists now know that aluminum adjuvant, when injected, can 1) impair brain development, 2) remain in the brain much longer than thought, 3) is brought into the brain by macrophages that grab the aluminum from the vaccine injection site and recirculate it, 4) may actually be worse when injected in small doses repeatedly (like it’s done during vaccination), and 4) there’s remarkably high levels of aluminum in the brains of people diagnosed with autism.Dr. Chris Exley, the author of this most recent study (#5, and the subject of my recent article) was so moved by the results of his study he said the following:

READ MORE OF THE ABOVE comprehensive article by J.B. Handley, Co-Founder, Generation Rescue and Board Member, World Mercury Project 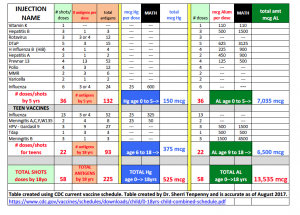 VLA Comment: These researchers and other moral saviors behind the scenes of public awareness (CD, CB, PK, GG, MDG, Cong B, Cong P…on and on) are the same dedicated persons who blew the whistle on Mercury in vaccines and dental fillings.  Most mercury was taken out of vaccines in 2001.  At one time mercury was in 16 vaccine doses, debilitating our children, causing them to be diagnosed as “mentally ill”, OCD, Bipolar, ADHD, Autism;  prescribed psychiatric drugs as young a 0-1 years old. However, Mercury is still in vaccines today (see chart above).

Mercury and aluminum are both ” heavy metals”. Heavy Metals are causing malfunction; electrical malfunction, immune dysfunction, digestive disorder in every incoming generation of humanity. Metals do not belong in the human physiology.  Adults are now spending thousands of dollars trying to get heavy metals out of their systems.  Where do you think these deposits came from? If heavy metals negatively affect the outer environment it would be common sense to conclude that they would be harmful to the inner environment of man…and especially dangerous our young children and pregnant moms.

According to IMS Health’s Vector One: National and Total Patient Tracker Database for 2013 these are the figures for 0-1-year-olds being prescribed psychiatric drugs:

While the CDC was correct in issuing their report on the 10,000 2-3 year olds (toddlers) being prescribed ADHD drugs, the number of toddlers on anti-anxiety and antidepressants is staggering in comparison:

And as for other age groups, the numbers start in the millions with 0-5 year olds:

Pharmacogenetics & MASS SHOOTINGS:  What is making our kids and soldiers psychotic!

Sep 1, 2017 – The group of most concern are known as the heavy metals and includes mercury, lead, cadmium, aluminium, and arsenic. The definition of what constitutes a heavy metal is vague and various criteria have been proposed based on density, atomic weight or atomic number, or various chemical properties and toxicity 1. 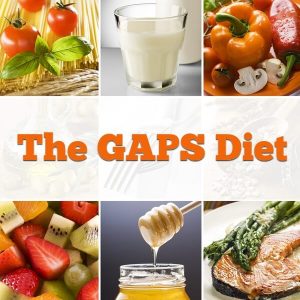 Not only is the GAPS diet a healthy way to quit eating processed foods and junk, it also helps reduce weight and fight disease-causing bacteria and infections in the body.

The GAPS diet has long been one of the healthiest ways to detox and boost gut flora. If you consider it is a way of life- and not just eating- you can reap all of its health benefits. So what are the health benefits of a GAPS diet? Starting from curbing sugar addiction, it can help you lose weight faster, clear up toxins from the bloodstream, and improve immune health.

BLOODSIMPLE: SUPER SICKO. Do you have ADD, ADHD, Autism, inability to focus, to cope, personality disorders, depression? HEADS UP! For last 20 years + the Centers for Disease Control (CDC) program has been injecting our generation with high levels of mercury (Thimerosal) in the childhood and college immunization programs. Although we are warned not to eat fish containing mercury, the CDC will not admit that injecting the entire generation with mercury directly into the bloodstream is a problem DO NOT VACCINATE! For more information contact VaccineLiberationArmy.com

Mitochondria research published during 2008, 2009 and 2012 in three journals – the Journal of Neuroscience Research, Journal of Toxicology, and Molecular Nutrition and Food Research – report the specific roles that two neurotoxins: ethylmercury (49.6%) in Thimerosal and aluminum in adjuvants—plus numerous pharmaceutical drugs, and all vaccines in general, play—or, more accurately, induce iatrogenic mitochondrial diseases, i.e., diseases caused by doctors, their treatments or medications. That aspect of the medical profession, by itself, should leave all medical doctors liable and wide open to medical malpractice lawsuits filed by parents of vaccine-damaged children and spouses or caregivers of adults damaged by vaccines and/or prescription drugs.

Mass vaccination campaigns were adopted after this time as the central management strategy for preventing infectious diseases, with many new vaccines being recommended in the National Immunization Program (Australia, for example). The implementation of mass vaccination programs occurred simultaneously with the development of partnerships between academic institutions and industry. All member countries of the World Health Organization (WHO), adopt the recommendations made by the Global Alliance for Vaccines and Immunization (GAVI). This is a partnership with the WHO and UNICEF that includes the World Bank, the International Monetary Fund, the International Federation of Pharmaceutical Manufacturers and Associations (IFPMA), the Bill and Melinda Gates Foundation (BMGF),the Rockefeller Foundation, the United Nations Development Fund (UNDF) and other private research institutions.

It is important that independent research is carried out to assess whether all thevaccines being recommended today are safe, effective and necessary for the protection of thecommunity. It is also important to have comprehensive evidence that it is safe to combine multiple vaccines in the developing bodies of infants. The framework for undone science is used to analyse the Australian government’s claim that the benefits of vaccines far outweigh the risks. Whilst the government claims serious adverse events to vaccines are rare this is not supported by adequate scientific evidence due to the shortcomings in clinical trials and long-term surveillance of health outcomes of recipients. A close examination of the ‘Swine Flu’ 2009 vaccine and the vaccine for human papillomavirus (HPV), intended to prevent cervical cancer, shows shortcomings in the evidence base and rationale for the vaccines.

This investigation demonstrates that not all vaccines have been demonstrated to be safe, effective or necessary. It also concludes that the government’s claim that the benefits of vaccines far outweigh the risks cannot be sustained due to the gaps in the scientific knowledge resulting from unfunded research and the inadequate monitoring of adverse events after vaccination.

UPDATE: ORCHESTRATED ATTACKS ON JUDY AND THE UNIVERSITY

Excerpts: The outrage over Judy becoming Dr Wilyman can best be understood by studying the operations of the group now calling itself Stop the Australian (Anti)Vaccination Network or SAVN. Since 2009, SAVN has been attempting to censor and discredit any public criticism of vaccination, using misrepresentation, ridicule, complaints and harassment, as I have documented in a series of articles. (Brian Martin)