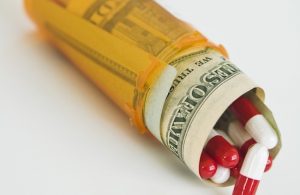 Money and pills in medicine bottle

A new study shows that nearly all of these patient advocacy groups are captured by the drug industry.

David Hilzenrath at the Project on Government Oversight (POGO) reports that at least 39 of 42 patient advocacy groups who participated in discussions with the FDA over agency review processes for prescription drugs received funding from pharmaceutical companies. And at least 15 have representatives of drug or biotechnology companies on their governing boards.

The study is particularly notable now because Congress is poised to pass the 21st Century Cures Act, which trades temporary additional funding for the National Institutes of Health and the FDA for permanent weakening of the FDA’s approval process. Over 1,400 lobbyists have been working on this bill, which would be a major financial boon to the drug and medical device industries.