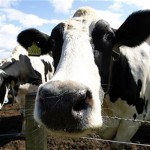 Milk from cloned cows given green light by Defra

Milk and meat from the offspring of cloned animals should be allowed to go on sale, according to a government minister. Read full article…

It should be noted that the FDA has not only approved cloned livestock but has issued guidelines for genetically engineered animals; all to go to the consumer UNLABELED.

1 thought on “(UK) Feb. 2011: Milk from cloned cows given green light by Defra. GMO livestock next?”