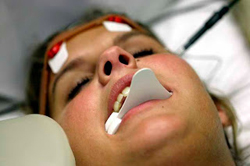 In 1947, psychiatrist Lauretta Bender.…In 1955, she reported on how she had administered 20 shock treatments to a child under three years old, who was on the children’s ward at New York’s Bellevue Hospital.(3)  Bender eventually administered this “treatment” to more than 500 children, and enjoyed a career as one of the most honored psychiatrists of her time. She is still on the govt. payroll today and exalted as a leading psychiatrist of our time.

One of the children she shocked was Ted Chabasinski, when he was a six-year-old foster child. His description of that experience stands in stark contrast to Bender’s:

I was six years old [in 1944]. My mother had been locked up in a mental hospital just before I was born, and I was a ward of the state. A psychiatrist at Bellevue Hospital in New York, Dr. Lauretta Bender, had just begun her infamous series of experiments with shock treatment on children, and she needed more subjects. So I was diagnosed as a “childhood schizophrenic,” torn away from my foster parents, and given 20 shock treatments….18 I was dragged down the hallway crying, a handkerchief stuffed in my mouth so I wouldn’t bite off my tongue. And I woke [after the shock treatment] not knowing where I was or who I was, but feeling as if I had undergone the experience of death. After four months of this. I was returned to my foster home. Shock treatment had changed me from a shy little boy who liked to sit in a corner and read to a terrified child who would only cling to his foster mother and cry. I couldn’t remember my teachers. I couldn’t remember the little boy I was told had been my best friend. I couldn’t even find my way around my own neighborhood. The social worker who visited every month told my foster parents that my memory loss was a symptom of my mental illness. A few months later, I was shipped to a state hospital to spend the next 10 years of my life.