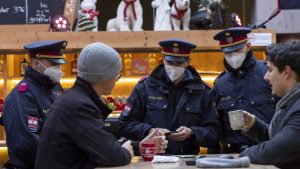 INNSBRUCK, AUSTRIA – NOVEMBER 15: Police officers monitor compliance with the lockdown in Innsbruck’s old town during the first day of a nationwide lockdown for people not yet vaccinated against the novel coronavirus on November 15, 2021 in Innsbruck, Austria. Starting today unvaccinated people may only leave their homes for a worthy reason, including going to work, buying groceries, going to the doctor or getting a vaccine shot. Austria is struggling to bring down a Covid infection rate that has reached over 770 infections per 100,000 people over a seven-day period. (Photo by Jan Hetfleisch/Getty Images)

The death of Europe

In his Letter Concerning Toleration (1689), the great Enlightenment philosopher John Locke sought to ‘settle the bounds’ between the individual and officialdom. He wrote that even if a man ‘neglect the care of his soul’ or ‘neglect the care of his health’, still the authorities have no right to interfere with him. ‘No man can be forced to be… healthful’, he wrote.

To Locke, as to other great European thinkers whose ideas gave rise to our Enlightened continent, the desire to ‘save’ an individual is not a good enough reason to meddle with his soul or his body. ‘God Himself will not save men against their wills’, he wrote. Yet where God once failed, the EU hopes to succeed. Where even the Almighty once feared to tread, held back by the small matter of man’s will, of man’s right to govern his own soul and body, the bureaucracies of 21st-century Europe will now rush in. They will brush aside the apparently trifling matter of bodily autonomy, they will discard the rights of self-government hard fought for over generations, and cajole people by brute law to submit themselves to medical intervention.

VLA COMMENT: The enlightened communities of today, its Masters, Administrators and Gurus infer that only when the individual is self governed, having integrated Supreme REALITY -Source (Jesus…I go to the Father; the Father and I are one) can the collective enjoy a fluid spontaneous governance. (SAT YUGA),  We are now, according to the Eastern, Vedic thinking, in KALI YUGA,,,The age of ignorance and destruction, It is not going to gradually get better.  We are descending into the pit of deplorably horror and you ain’t seen nothing yet.

VLA Comment:  It is now 2019, 11 years latter, sperm count is way down under 50%; in vitro pregnancy centers are ubiquitous; the population of the west has been disabled through vaccination.  Migrant populations are taking over Europe, Canada.  These Islamic folks are having an average of 8 babies to Europe’s 1.   There is a general resistance to vaccination in the Arab world, but soon enough they too will perish in the hands of vaccine tyranny,  Add 5G to the mix and humanity as we know it is facing extinction and perhaps transhumanism replacement, immortalized in Hell.

Germany Will Become An Islamic State, Says Merkel – ‘They’ll Have To Come To Terms With It’

VLA COMMENT:  This article breaks down the percentage of Muslims in each of the various countries in Europe.  ie:  FRANCE:  In France, 30% of children age 20 years and below are Muslims. The ratio in Paris and Marseille has soared to 45%. In southern France, there are more mosques than churches.

“In Europe, France is the only country to maintain the policy of compulsory vaccination against diphtheria, tetanus and pertussis,” EurActiv reports.

VLA comment: Mandate Insanity-   Parents and researchers are challenged by the establishment if they dare to correlate an adverse reaction to a vaccine within days of administering a vaccine. And those we elect as lawmakers are blind to see that the US mandated vaccine program correlates with one of the highest rates of infant mortality in the developed world.  Despite our low infant mortality standing based on science and statistics,  apparently it doesn’t stop the United States from imposing its view and taking a  “worldwide vaccine leadership” role to disable generations and generations of humanity