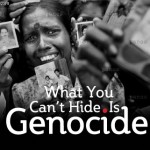 In the early 1990’s, according to a report from the Global Vaccine Institute, the WHO oversaw massive vaccination campaigns tetanus in Nicaragua, Mexico and the Philippines. Comite Pro Vida de Mexico, a Roman Catholic lay organisation, became suspicious of the motives behind the WHO program and decided to test numerous vials and found them to contain human Chorionic Gonadotrophin, or hCG. That was a curious component for a vaccine designed to protect people against lock-jaw arising from infection with rusty nail wounds or other contact with certain bacteria found in soil. The tetanus disease was indeed also rather rare.

It was also curious because hCG was a natural hormone needed to maintain a pregnancy. However, when combined with a tetanus toxoid carrier, it stimulated the formation of antibodies against hCG, rendering a woman incapable of maintaining a pregnancy, a form of concealed abortion.