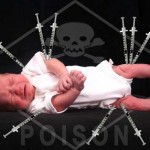 : more than 2,000 babies died in the United States after receiving the  pneumococcal and Hib vaccines .  Yet, unlike Japan who banned the vaccines after four infant deaths, US  authorities refuse to warn parents and halt production. Read more… The lack of informing physicians and the public is reminiscent of the 2,500% increase in VAERS reports of abortions after pregnant women were injected with the H1N1 shot in the  2009/10 flu season