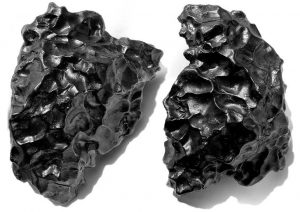 During human history there is a long list of rites and cults gathering around black stones containing black goo, all the way back to Greek coins showing that the tree in paradise was connected to these stones. This would hint to a very rational interpretation of the process that kicked humanity out of the collective consciousness of paradise, re-directing its consciousness to black goo stuck on retinoid consciousness, creating duality. Additional, there are repeating connections between black stones that resemble the stones identified in the NS mining area, demons and black magic rituals done by humans to revive these demons. Also, these stones form the center of Islam and Christianity; being deposited in the Kaaba in Mecca and under all the altars oft the older churches of Europe. Would be interesting to find out which consciousness they carry.

Black Goo carries an a-biotic consciousness representing the collective consciousness of the entire bio-sphere. The form of organization is holographic, thus every portion of Black Go is able to interact as a fully conscious being. Looking at the mythological reception of nature it has been described as Lucifer, Mother Earth, the Black Madonna, and is meant to be the physical location of the collective memory of mankind, aka the akasha chronic.

This dis-connection from the actual state of consciousness has been regarded in mythology as the fall of Lucifer.

During the evolution of life certain life forms stayed connected to the geologically marginalized Black Goo and thus got stuck on reptilian consciousness. When humans are brought into contact with this type of Black Goo, the light-transfer of the bio-field of the human body might be redirected onto the archaic Black Goo, which might reduce the complexity of the human Chakra System to blue, yellow and red, i.e. to mental abilities, life force and sexuality. It leads to a state of being intelligent, but heartless and cold in appearance. It disconnects the human from the collective consciousness of his time. Something like this must have happened in the event described in the mythology as the deterioration from paradise. The effect seems to be handed over to following generations referred to as the heritable sin mentioned in the bible by ongoing quantum entanglement transferred with the genetic information. It also refers to the traditions of the bloodlines, who seem to try to keep this reptilian entanglement as strong as possible. Read much more…