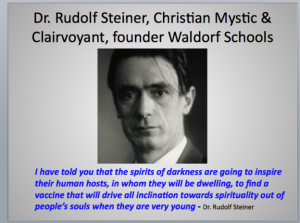 Degradation of the Waldorf Schools, internationally

It must be known by now in Europe, that in the United States, state of California, a law has been passed (SB277) that no child can go to a public, private or pre-school without being fully vaccinated (49 vaccine doses by the age of six). There are 24 Waldorf schools in California that may either lose their accreditation, lose as much as or more than 50% of its student population, or in order to save the school, host fully vaccinated children. This crisis is the result of the corruption of the pedagogy that has been happening for decades as it pertains to the Waldorf system of education. This crisis for the Waldorf schools is a result of the blatant disregard for the mystical, metaphysical knowledge of the founder by the administration failing to take a clear stand on his position on inoculation. It is due to this disregard and weak policy on vaccination, that the Waldorf schools internationally are faced with this crisis.

Despite the Anthroposophical education of the teachers and the administration on the evolution of humanity and the battle of Lucifer and Ahriman, the Waldorf schools have capitulated to these very forces because they didn’t stand strong on vaccine policy.

“…these inoculations will influence the human body in a way that will make it refuse to give a home to the spiritual inclinations of the soul. People will be inoculated against the inclination to entertain spiritual ideas”.   have told you that the spirits of darkness are going to inspire their human hosts, in whom they will be dwelling, to find a vaccine that will drive all inclination towards spirituality out of people’s souls when they are very young”  READ THE FULL LETTER  SteinerInternationalletter

In the name of the Christ principle, I can only suggest that the Waldorf associations stand united in California and defy this unjust law (SB277).