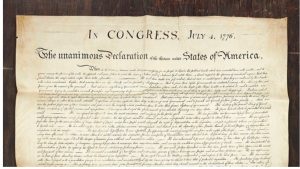 PHILADELPHIA—Researchers with Independence National Historic Park have located an ancient document they say renders all national mandates and restrictions void. The document, dating to 1776, is being referred to as ‘The Declaration of Independence’ by park historians who allege it details the existence of unalienable rights and that governments derive their power from the consent of the governed. Sources indicate the document was found in the park archives, allegedly buried under a stack of Benjamin Franklin’s raunchy poems.