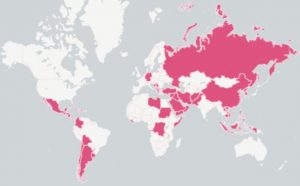 Using data on US military interventions published by the Evergreen State College, in Olympia Washington, indy100 has created this map (below). The data was compiled by Dr Zoltan Grossman, a professor of Geography and Native Studies.

The map documents a partial list of occasions, since 1890, that US forces were used in a territory outside the US.

It does not include threats of nuclear weapons against a territory, such as during the Berlin Air Lift (1948-49).

It also excludes any time US military personnel were deployed to a foreign country for an exclusively humanitarian purpose – e.g. sending troops to the Democratic Republic of the Congo to provide assistance to refugees fleeing the Rwandan genocide (1996-97).