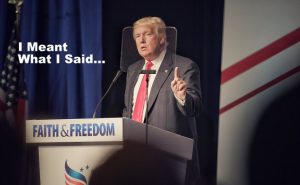 The opening paragraph is remarkable:

“The freedoms of conscience and of religious exercise are foundational rights protected by the First Amendment to the U.S. Constitution and by Federal statutes. These laws ensure, for example, that Americans are not compelled to speak, to salute the flag, to join a national church, or to vote for a particular candidate. They also ensure that as a general matter, the Federal government may not discriminate against its citizens for the views they hold.”

Among the long list of exemptions in federal law from compulsory health care and services on THE VERY FIRST PAGE is “immunizations.”

On the second page is a quote from United States v. Seeger, a 1965 Supreme Court case.

“[B]oth morals and sound policy require that the State should not violate the conscience of the individual. All our history gives confirmation to the view that liberty of conscience has a moral and social value which makes it worthy of preservation at the hands of the state. So deep in its significance and vital, indeed, is it to the integrity of man’s moral and spiritual nature that nothing short of the self-preservation of the state should warrant its violation; and it may well be questioned whether the state which preserves its life by a settled policy of violation of the conscience of the individual will not in fact ultimately lose it by the process.”

WOW! Now that’s a Supreme Court I can support!

How about this from Trump’s Executive Order of May 8, 2017? Federal law

“protects not just the right to believe or the right to worship; it protects the right to perform or abstain from performing certain physical acts in accordance with one’s beliefs.”

One of the LISTED “Problems that the Proposed Rule Seeks to Address,” is “being required to administer or receive certain vaccinations derived from aborted fetal tissues as a condition of work or receipt of educational services.” READ MORE…