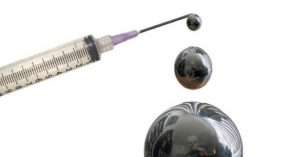 Currently about 20 childhood vaccines include an aluminium adjuvant. The aluminium salt is the major component of a vaccine (after water) and its high content is why vaccine preparations are invariably cloudy in appearance

Exley C, An aluminium adjuvant in a vaccine is an acute exposureto aluminium,Journal of Trace Elements in Medicine and Biology(2019), Abstract

VLA Note:  you have to pay for access to the entire study

Unraveling the enigma: elucidating the relationship between the physicochemical properties of aluminium-based adjuvants and their immunological mechanisms of action  READ MORE…STUDY

Depression is on the rise around the world and, according to one author, the World Health Organization (WHO) has stated that approximately 300 million people worldwide suffer from this debilitating disorder

Author, Amy Morin, LCSW, wrote in her article, Depression Statistics Everyone Should Know, that in the United States alone, 16.2 million adults have experienced a major depressive episode in the past year.

Dr.Kelly Brogan’s  paper outlined the strong possibility that the aluminum adjuvant that is currently being used in at least 18 childhood vaccinations may be responsible for the increase in long-term brain inflammation, neurological complications and autoimmunity. She stated that:

“One of the most relevant aluminum-containing vaccines is Gardasil, responsible for more than 34000 reported adverse events,and now Gardasil 9, which contains twice the aluminum dose (ie, now with 500 μg per 3 recommended doses).”

Either by oral ingestion as salt or as an adjuvant, Al exposure may
induce the dysfunction or activation of glial cells that are important in
maintaining the homeostasis of the CNS and in neurodevelopment
(Morris et al., 2017). Furthermore, Al can induce the activation of
microglia to produce TNF-α, IL-6, iNOS, NOS-2, neuroinflammatory
PICs and ROS (Zaky et al., 2013). The microglia may govern the regulation
of neurogenesis and neurodevelopmental factors and interfere
with synaptic pruning and with the proliferation of neurons, which in
turn, may lead to the development of ASD (Kettenmann et al., 2013;
Edmonson et al., 2016; Hoeijmakers et al., 2016).

Aluminum in the Brain in Multiple Sclerosis: Regulatory and Funding Agencies Silent, Complicit

In a new case series study, brain tissue from 14 donors with a diagnosis of MS was studied in a case series by Mold et al (2018) using transversely heated graphite furnace atomic absorption spectrometry. The study found high aluminum content (>10 ug/g dry weight) in all areas of the brain studied, with some areas exceeding 50 ug/g.

In February 2018, the FDA and CDC approved the recommendation for a new hepatitis B vaccine, Heplisav-B targeting adults over the age of 18. The U.S. Food and Drug Administration (FDA) had twice rejected the application for licensure for Heplisav-B in the past four years because of safety signals. Heplisav-B differs from other licensed hepatitis B vaccines in that it contains a new synthetic adjuvant known as cytosine phosphoguanine 1018 (CpG 1018) composed of short synthetic DNA molecules. In 2016, the FDA rejected an application for licensure for the Heplisav-B vaccine, because the agency was concerned about an increased rate of heart attacks and deaths in people who had been given the vaccine. During the trial, approximately 14 subjects had heart attacks. In July 2017, the FDA committee convened to re-evaluate the scientific evidence and make a decision on whether Heplisav B should or should not be approved for use in the U.S. This committee had only one cardiologist on the team, Milton Packer, MD, who is a distinguished scholar in cardiovascular science at the Baylor University Medical Center in Dallas, Texas. According to Dr. Packer, it was possible that the Heplisav B vaccine’s novel adjuvant was related to the higher number of heart attacks in study participants who received the experimental vaccine. He stated: “To know if the 7 -1 heart attack imbalance represented a real risk, we’d need comparative data in 50,000 people.” However, the only way to conduct such a large trial would be to approve the vaccine and see what happens in the public. With Dr. Packer abstaining in his vote to recommend the vaccine, the FDA committee approved it anyway. Dr. Packer stated: “Why did I abstain? Based on the available data, it was impossible for anyone to know if the increase in heart attack risk was real. There is a simple rule in life: if you don’t know, you should say you don’t know.” The vaccine is now available to the public, and all those who receive it are basically guinea pigs to find out if heart attacks will result from the experimental vaccine, and if it will continue to have FDA approval.

[Impact of different adjuvants on immunogenicity of the HBV particle vaccine containing the S + preS1 fusion antigen in Balb/C mice].

A breakthrough study by scientists from the University of British Columbia in Vancouver, Canada has been published in the Journal of Inorganic Biochemistry demonstrating that significant correlations exist between rates of Autism Spectrum Disorder (ASD) and total aluminum adjuvants given to children through vaccines in several Western countries.

This is the first experimental study to demonstrate that aluminum adjuvants can impair social behavior if applied in the early period of postnatal development.

An infant in the United States, in its first two years, usually receives 27 vaccines as part of the routine pediatric vaccination schedule; many of which contain aluminum adjuvants.

JOURNAL OF TRACE ELEMENTS IN MEDICINE AND BIOLOGY

On Day 1 of life, infants receive 17 times more aluminum than would be allowed if doses were adjusted per body weight.

FDA regulations require safety testing of constituent ingredients in drugs (21 CFR 610.15). With the exception of extraneous proteins, no component safety testing is required for vaccines or vaccine schedules. The dosing of aluminum in vaccines is based on the production of antibody titers, not safety science. Here we estimate a Pediatric Dose Limit that considers body weight. We identify several serious historical missteps in past analyses of provisional safe levels of aluminum in vaccines, and provide updates relevant to infant aluminum exposure in the pediatric schedule considering pediatric body weight

The small quantity of aluminum retained in the body

accumulates over time. Most of the aluminum that accumulates

percent) and some in the brain (about 1 percent). The remaining

nodes and glands. In fact, low quantities of aluminum can be found

VLA comment:  Apparently it is okay with the CDC and Paul Offit at the Philadelphia Children’s Hospital that…and I quote and excerpt…the process which a small infant has to deal with excreting this poison or the consequences of retain the metal in the bones or the brains is inconsequental: