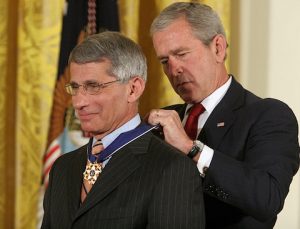 With the stroke of Cheney’s pen, all United States biodefence efforts, classified or unclassified, were placed under the aegis of Anthony Fauci. So important was this new command structure that a representative from the office of Scooter Libby, Cheney’s powerful chief of staff, was physically placed in NIAID headquarters in Washington during the transition to function as “a kind of political commissar” from the vice president’s office. This gave Fauci unparalleled access to not just Cheney, but President Bush, to whom he had an open channel.