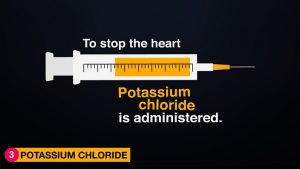 Why is Potassium Chloride used in infants’ vaccines?

Cardiac arrest in the pediatric population

As of 2013, Sudden Unexpected Infant Death (SUID) accounted for about one in seven infant deaths (about 3,700 annually), with about 20% thought to be related to cardiac vulnerabilities activated by exogenous stressors.

Sudden Infant Death
Causes of respiratory failure and shock leading to cardiopulmonary arrest in these age groups include trauma, sudden infant death syndrome, respiratory distress, and sepsis [1,5-8]. This is in contrast to adults, for whom the most common cause of cardiac arrest is ischemic cardiovascular disease.Nov 28, 2018
VLA Comment:  What is the difference between a lethal injection and a pediatric vaccine?

Potassium chloride is also commonly known as “Muriate of Potash”
used in medicine, scientific applications, and judicial execution through lethal injection. The majority of the potassium chloride produced is used for making fertilizer. Side effects can include gastrointestinal discomfort including nausea and vomiting, diarrhea and bleeding of the gut. Orally it is toxic in excess, high doses can cause cardiac arrest and rapid death.

Children born in the U.S. are 76% more likely to die before their first birthday than infants born in 19 other wealthy nations, and sudden infant deaths are one of the top five causes.

Many vaccine package inserts list cardiac-related adverse events that have occurred either during clinical trials or during postmarketing. For example: