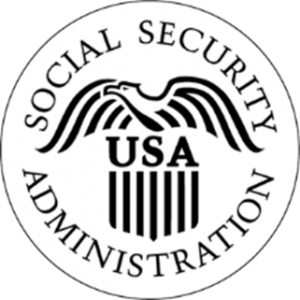 The government is now referring to our Social Security checks as a “Federal “Benefit” Payment.” This isn’t a benefit. It is our money paid out of our earned income! Not only did we all contribute to Social Security but our employers did too. It totaled 15% of our income before taxes.

If you calculate the future value of your monthly investment in social security ($375/month, including both you and your employers contributions) at a meager 1% interest rate compounded monthly, after 40 years of working you’d have more than $1.3+ million dollars saved!

Instead, the folks in Washington pulled off a bigger “Ponzi scheme” than Bernie Madoff ever did. They took our money and used it elsewhere. They forgot (oh yes, they knew) that it was OUR money they were taking. They didn’t have a referendum to ask us if we wanted to lend the money to them. And they didn’t pay interest on the debt they assumed. And recently they’ve told us that the money won’t support us for very much longer.

VLA Comment:  Ask your representative to deal with this!!! The renaming of this as a “benefit” is a slight of linguistic hand…It is not a “benefit” that the Government can issue or withdraw…IT IS OUR MONEY WE SAVED, be held by the government… that we and our employer put in the the hopper to support our senior years.

Article:  Congress Does Not Care About Seniors (must read)

We can characterize the entire trust fund system as the government borrowing from Social Security, 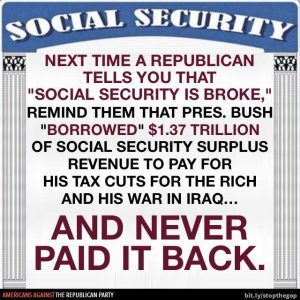 The meme’s language implies that Bush bailed on a loan, but no one was really pressing him for repayment. During his presidency, the Social Security trust fund was still running surpluses (which stopped in 2010), enough to cover the benefits checks, and had no need to cash in their bonds (which won’t happen until 2020).

The larger question posed by critics of the trust fund system is if and how the government will provide cash for all the bonds, now totalling  $2.8 trillion (as of 2015) these bonds are a special class of securities unique to the Social Security fund that can’t be sold. Because they’re not-marketable, some contend that they’re “worthless IOUs.”READ MORE...

VLA Comment in layman’s terms:  Social security payments to current retirees are taken from the current SS payroll taxes of employed American worker.  The surplus, in this case 2.8 Trillion dollars, gets (got) borrowed for other government purposes to which bonds (IOUs) are issued to be paid back in 2020.  The US government is about 20 Trillion dollars in debt. Where will the Government get 2.8 Trillion dollars to return to Social Security Trust?

Answer: From today’s taxpayer.  So in other words, yesterday’s taxpayer through “payroll taxes” had money taken out of their paychecks which resulted in a huge healthy surplus for Social Security.  Now, that it is not sitting in cash, but in iOU bonds, today’s taxpayer will have to pay more into it.  Will the govt. raise the payroll taxes?  Or will they take it from another budget?

In any case…we want to see that money repaid to Social Security!!!

How will the Democrats pay for MEDICARE FOR ALL when we can’t even pay Medicare for the elderly as projected in 2032?