The TPP is the largest-ever economic treaty, encompassing nations representing more than 40 per cent of the world’s GDP. (But China and Russia are developing their own) The chapter published by WikiLeaks is perhaps the most controversial chapter of the TPP due to its wide-ranging effects on medicines, publishers, internet services, civil liberties and biological patents.

VLA comment: This is all part of establishing the field for reset of global currencies which will be based on “resources”. The United States has been planning since the late 70s to own the world food supply through first the change in the US patent office that allowed the patenting of novel life forms.  The plan is to alter the patent laws in all the participating TPP countries so that the USA will get a large piece of the global currency pie. This and the one below on the environment is a set up for World governance where the commonwealth of all nations to form a tax basis for global government is air, water, land (the environment).  Hence, the global propaganda on Climate change which is actually is predominantly a solar event and the selling carbon credits to the big polluters.

The Environment Chapter covers what the Parties propose to be their positions on: environmental issues, including climate change, biodiversity and fishing stocks; and trade and investment in ‘environmental’ goods and services. It also outlines how to resolve enviromental disputes arising out of the treaty’s subsequent implementation. Read more… 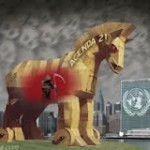