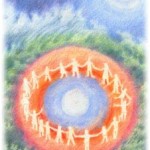 Live Education- Home school from the Waldorf perspective…go to website…

The first phase of Rudolf Steiner’s life was spent trying to understand what it means to “know”. From this quest he developed his “Philosophy Of Freedom” presenting his principles of free thinking and free morality. This book lives at the core of work and he recommended it throughout his life. For anyone interested in learning about it a new online Philosophy Of Freedom Study Course is available at http://www.philosophyoffreedom.com . Its Free and includes videos, illustrations, and diagrams to help study the book.

March 2011 There are at least 10 states where some iteration of a “financial emergency” clause is rearing its head whereby the State can assign a manager who has the power to transcend or even dismiss elected officials; break existing contracts, etc.

On Wednesday the 9th of February 2011 from 6.30pm GMT people from all around the world will commence dining with their friends in a unified effort to raise awareness of the importance of freedom of speech. Donate to Assange Defense Fund…
Brought to you by www.forbiddenknowledgetv.com

Uranus moving into Aries would shock us, shake us, and waken us. Uranus went into Aries on March 11th-
According to western “intuitive” astrologer, Guy Allair, the greatest revolution in human history begins March 11th, 2011 with the planet Uranus’s entrance into the constellation of Aries. This is a pinnacle moment in human history that will come to be known as the Revolution of Consciousness. The first “shot” of this revolution will be a metaphysical one, fired from a divinely awakened quantum gateway.

Read more…. At the end of the video…the remote viewer indicate there is more to come…see blog Message from Mathew…