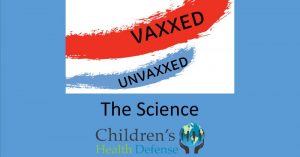 Fully Vaccinated vs. Unvaccinated — A Summary of the Research

The Institute of Medicine (IOM) has repeatedly asked CDC to create studies which explain,

“How do child health outcomes compare between fully vaccinated and unvaccinated children?”

During a November 2012 Congressional hearing on autism before the House Committee on Oversight and Government Reform, Dr. Coleen Boyle, the Director of the National Center on Birth Defects and Developmental Disabilities, gave evasive answers to lawmakers pressing her on this point. After considerable badgering, she finally stated,

“We have not studied vaccinated versus unvaccinated [children].”

Verstraeten found a dramatic link between mercury-containing hepatitis B vaccines and several neurological injuries including autism and prepared the study for publication. CDC shared Verstraeten’s analysis with the then four vaccine makers but kept it secret from the American public.

The data in CDC’s 1999 Verstraeten study clearly inculpated thimerosal as the principle culprit behind the autism epidemic.