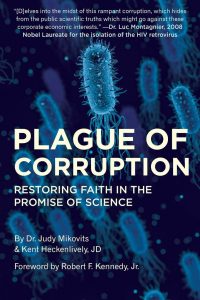 VLA Comment: This is how it goes:  The body of Scientists and Researchers, including Judy Makovits, now a whistleblower, in a naive and misguided attempt to stop the spread of various plagues and viruses in mankind, set themselves in the laboratories for the last half century experimenting on manipulating viruses by using various animal tissues such as from a mouse, monkey’s etc.  It has all run amok!

ALL VACCINES with Animal tissue such as Bovine serum, dog kidney cells, porcine, calf serum  has introduced animal RNA into the blood and body of the human population.  Science has engineered transmission of foreign animal viruses that ordinarily would not jump species into the human population via VACCINES…that are “mandated” to all children and may be mandated (as in Denmark) to adults and anyone who seeks a hospitization for injury, disease or surgery.

The pre-set presence of animal serum, proteins, RNA pre-imposed on our population by Vaccines creates a reception of mankid to animal viruses such as the Coronavirus, ebola, lyme plagues.

Furthermore, as Judy will explain, the experimentation has fast tracked the speed of the  transmissions to the point of plague;  transmission that might have taken centuries to evolve and infect humankind,