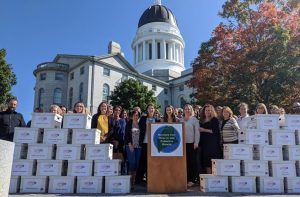 On Friday, September 18, 2019, Mainers for Health and Parental Rights held a press conference at the Capitol of Maine to announce they had obtained 93,000 signatures to support their grass-roots effort, Veto 798 Maine.

a bill that was pushed through the legislature despite overwhelming opposition from the citizens of Maine, and then quietly signed into law by Governor Mills in May of 2019.

LD798 threatens all of our rights including:

LD798 eliminates religious and philosophical exemptions to vaccination, prohibiting parents, staff and healthcare workers from exercising their right to decline one or more vaccines required by schools and employers. If Maine citizens do not comply with the new law, they face expulsion from all public, private, parochial and online schools and will be terminated from employment.

To get the “Peoples’ Veto” on the ballot for March, 2020, they were required to obtain 64,000 signatures from Maine residents within 90 days, September 18th.

The people of Maine will now apparently have the opportunity to vote and veto this law next March.  READ MORE…

The White House announced the president, using his Antiquities Act authority, designated 87,500 acres of land in north central Maine as a national monument. The Antiquities Act empowers the president to designate national monuments from public lands. Obama has used this authority liberally, assigning over 265 million acres of public land the monument designation during his tenure.

Aug 24, 2016 – President Barack Obama on Wednesday declared a new national monument in Maine on 87,000 acres donated by the founder of Burt’s Bees, fulfilling conservationist Roxanne Quimby’s goal of gifting the land during the 100th anniversary of the National Park Service.

Co-founder of Burt’s Bees says he was ousted

Shavitz, 79, grew up around New York, served in the Army in Germany and shot photos for Time-Life before leaving New York for the backwoods of Maine.

He was a hippie making a living by selling honey when his life was altered by a chance encounter with a hitchhiking Quimby. She was a single mother and a back-to-the-lander who impressed Shavitz with her ingenuity and self-sufficiency.

She began making products from his beeswax, and they became partners. An image of Burt’s face — and his untamed beard — was featured on labels.

The partnership ended on a sour note after the business moved in 1994 to North Carolina, where it continued to expand before Shavitz was given the boot. These days, he makes occasional promotional appearances on the company’s behalf.

Washington, D.C. (September 15th, 2016) –Today, President Obama announced his unilateral creation of a 4,900 square mile ocean monument. These waters in the newly created Northeast Canyons and Seamounts Marine National Monument off the Atlantic coast have been a primary source of livelihood for New England fishermen.

“Within just a matter of weeks, President Obama has overruled local voices in Maine with a new designation and dismissed public input in Hawaii by unilaterally expanding a marine monument off the state’s coast. Now, the president has designated a 4,900 square mile monument off our Atlantic coast with just a stroke of his pen. This monument threatens the livelihoods of local fishermen and American families. We need to reform the Antiquities Act to prevent this blatant abuse by legacy shopping presidents and ensure that local voices have a seat at the table.”