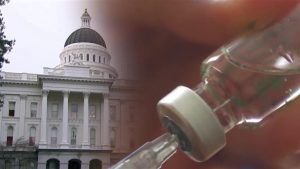 A clear-sighted judge chose to read the law and saw that NY law clearly gives physicians the right to issue a medical exemption to vaccines and other procedures. NY DoH had issued a directive and a form to physicians which appeared to compel them to follow the vaccine exemption guidelines of the CDC’s Advisory Committee on Immunization Practices (ACIP). As it happens, only people with prior anaphylactic reactions to vaccines qualify according to ACIP.

Unvaccinated people are automatically disqualified (no prior vaccine reaction is possible in the absence of any vaccination), as are those with other reasons for medical exemptions, such as genetic mutations, Gillian Barre Syndrome, etc., etc.

BUT NO!  Apparently the Democrats (who love their Pharma funding) are on a tare to remove all exemptions including medical.  Outrageous.

VLA advice:  Move to a state that has a considerable Republican majority who are traditional advocates for family and religious freedom.  See chart

NY, MAKE 9 PHONE CALLS TODAY TO MOVE BILL A8123B, the bil that protects the religious waiver to vaccines. We have to light a fire under the Education Committee Assemblymembers who have NOT made a decision on the bill. While they may not be your rep, they make decisions that affects 20 million NYers. YOU are one of them.
They are:

Ask them, politely and respectfully, to support the bill that keeps kids in public school and respects existing law. Need more to say? See below:

Religion is the name given to the recognition by the “part” of its relationship to the “Whole”.  It is observed that there is a constantly growing demand by the part (individual) for an increased awareness of that Relation (God). Religion is the experience of the “seeking” aspirant to the “sought-for” Divinity. This archetypical drive towards wholeness (God) is natural to mankind, inherent in all individuals. Therefore,  Religion is natural and personalized foremost to the individual and out of that comes human systems, not the other way around!

“Every Church claims that ‘we are the true Church’ and that they have some ultimate authority. We have the infallible Pope;  the inerrant Bible.

The idea that the Truth of God can be bound in any human system; by any human creed; by any human book is almost beyond imagination. God is not a Christian. God is not a Jew or a Muslim, a Hindu or a Buddhist. All of those are human systems which Human being have created only to help walk us through the mystery of God. We honor tradition. We walk through the tradition. But the tradition does not define God. It only points to God.

“No one church, its representative or the government has the authority to define religion, to authorize, or substantiate an individual’s religious beliefs”

A state assemblyman has introduced a bill to toughen New York’s vaccination law by eliminating religious exemptions for parents seeking to enroll their children in school, setting up a debate within his own party over whether the government should challenge the sincerity of a religious conviction.

Assemblyman Jeffrey Dinowitz, a Democrat from the Bronx, said he doesn’t believe the vast majority of parents taking advantage of religious exemptions are truly devout.

Instead, he said, “they have bought into the garbage that these vaccinations can cause autism. That’s a lot of crap.”

January 8,2015 The District Court granted the state summary judgment, and the 2nd Circuit affirmed that finding Wednesday, citing Prince v. Massachusetts, a 1944 decision by the Supreme Court.
This case holds that a parent “cannot claim freedom from compulsory vaccination for the child more than for himself on religious grounds. The right to practice religion freely does not include liberty to expose the community or the child to communicable disease or the latter to ill health or death,'” the ruling states.
A law requiring the vaccination of all children to attend public school, regardless of religious beliefs, would be constitutional, the court found.

Dina Check, the plaintiff who challenged the New York law at issue on the basis of her Catholic beliefs, testified that medical treatment should be “strictly by the word of God,” and that vaccines could hurt her daughter.
A federal magistrate in Brooklyn denied Check’s daughter an exemption, however, citing “compelling evidence that plaintiff’s refusal to immunize her child is based on medical considerations and not religious beliefs.”
The judge pointed to Check’s own “testimony that she did not adopt her views opposing vaccination until she believed that immunization jeopardized her daughter’s health.” Read more..

VLA Comment:  A DANGEROUS DECISION:  WE MUST MAINTAIN RELIGIOUS WAIVERS!

Warning: Do not double speak (for now)!  Being religious does not mean you have no brain.  Certainly a religious person can hold a deep seated belief in the Divine manifestation of the human life form and simultaneously determine via research that vaccines will likely put her child at risk.  One would also think that it would be against any religious belief that if a parent intellectually determines that the child would be endangered by vaccination, it would go against her religious belief and conscience if she went ahead and applied a medical treatment that she believed would harm her child. I wonder why they did not argue that!  And although she may not have adopted her religious belief until after she became aware of the dangers of vaccines that does not preclude a later epiphany…like a visit from Michael the Arc Angel or Jesus.  Who can argue with that or say that the Divine visit didn’t happen?  This New York court is bought!