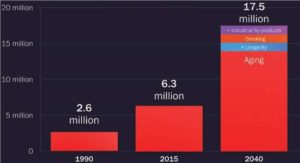 Neurological disorders are now the leading cause of disability globally, and the fastest growing neurological disorder in the world is PD, a slowly progressive disorder that affects movement, muscle control, and balance. In 1855, forty years after Dr. James Parkinson first described the condition, approximately 22 people of 15 million in England and Wales died of PD. In 2014, roughly 5,000 to 10,000 individuals of 65 million in the UK died of PD. From 1990 to 2015, the number of people with PD doubled worldwide to over six million. Driven principally by aging, this number is projected to double again to over 12 million by 2040, and additional factors, including increasing longevity, declining smoking rates, ….VLA Comment: How about mass vaccination for nearly every newborn, toddler, child and adolescent….that presents in the majority of the emerging generation neurological and physiological disorders and regressions.