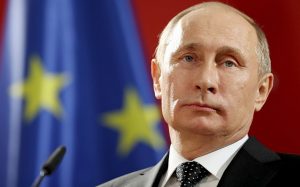 Whether or not you believe in the power of the human mind to connect with Source and withdraw information about the future, things are lining up in such a way that Cayce’s prophecies regarding Russia are proving quite prescient now, giving us a clue that at least we shouldn’t hold on too tightly to any preconceived notions about what will happen in coming years.  Read more…

Russia has adopted a new law that prohibits all GMO crop cultivation and GMO animal breeding in the Russian Federation. Putin and Tkachev believe that the new law will aid Russia in becoming the world’s largest supplier of healthy, environmentally friendly and high-quality clean food – especially since the global demand for organic products is rising quickly.

“When your children are barely human, psychologically-altered bots, their nerve cells and synapses failing to connect, and their neurodevelopmental processes dulled to the point of restricting them to sub-human level repetitive grunts and gormless stares, what are you going to do then?”

The report says that President Putin believes the next stage of human evolution is currently in “grave risk” and that Western and global powers are “intentionally decelerating the process for their personal gain.”

“We as a species have the choice to continue to develop our bodies and brains in a healthy upward trajectory, or we can follow the Western example of recent decades and intentionally poison our population with genetically altered food, pharmaceuticals, vaccinations, and fast food that should be classified as a dangerous, addictive drug.”

Describing the average government-controlled Westerner as an “intensively vaccinated borderline autistic fat man slumped in front of a screen battling a high-fructose corn syrup comedown,” the report states that such tactics used by governments to subjugate their citizens are not only “dark/evil” but “counter-productive in the medium to long term.”

“We must fight this. A physically and intellectually disabled population is not in our interests,” the report states. Read more…

Russian President Vladimir Putin has signed the Russian Federation Code of Administrative Offences into law, including a new article establishing liability for the violation of mandatory requirements for the labeling of food products that contain GMOs.

Putin to Western elites: Play-time is over  Speech

Putin’s speech at the Valdai conference in Sochi, Oct. 24, 2014. This is probably the most important political speech since Churchill’s “Iron Curtain” speech of March 5, 1946.

“Let’s ask ourselves, how comfortable are we with this, how safe are we, how happy living in this world, and how fair and rational has it become? Maybe, we have no real reasons to worry, argue and ask awkward questions? Maybe the United States’ exceptional position and the way they are carrying out their leadership really is a blessing for us all, and their meddling in events all around the world is bringing peace, prosperity, progress, growth and democracy, and we should maybe just relax and enjoy it all?  Let me say that this is not the case, absolutely not the case”.

“Instead of settling conflicts it leads to their escalation, instead of sovereign and stable states we see the growing spread of chaos, and instead of democracy there is support for a very dubious public ranging from open neo-fascists to Islamic radicals.”

The Western government-controlled people are an “intensively vaccinated borderline autistic fat man slumped in front of a screen battling a high-fructose corn syrup comedown”, claims Putin who says that Russians “must be protected … at all costs”.